A tiny wearable insulin patch made from extremely biocompatible materials could have huge impacts on diabetes patients’ quality of life within the next decade. Elly Earls meets the man behind the invention, Zhen Gu, to find out more. 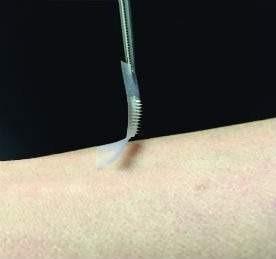 A new smart insulin patch created from biocompatible, non-toxic materials that mimic how the human body responds to high blood sugar could be commercialised within five to seven years, making painful and imprecise insulin injections a thing of the past for diabetes patients. But how did the researchers of the concept choose the materials for the potentially revolutionary new device; what challenges do they anticipate in bringing it to the market; and does their approach hold promise for other applications too?

Today, almost 400 million people worldwide suffer from diabetes, and those with access to medication generally keep their condition under control with regular finger pricks and repeated insulin shots: a process that is painful and potentially life-threatening if the patient fails to inject the correct amount of medication. Researchers have developed options to reduce the chance of human error – closed-loop systems connecting mechanical sensors that track blood sugar with pumps that administer the insulin – but these innovations are uncomfortable and inconvenient for patients at present, as needle-tipped catheters have to be stuck under the skin and replaced every few days.

New research has recently come out of the University of North Carolina (UNC) and North Carolina State University (NC State), however, showing that a new device – which mimics humans’ inbuilt glucose-sensing mechanism, and is made from extremely biocompatible materials – could address these issues, potentially resulting in huge health and quality-of-life improvements for diabetes patients around the world.

The science behind the smart patch

It’s very tiny and convenient, and would be less expensive than a pump or electronic device.

"There’s a huge population of people who suffer from diabetes at the moment, across the world, and current treatments are painful, inconvenient and can be quite dangerous," says Zhen Gu, a professor in the Joint UNC/NC State Department of Biomedical Engineering, and co-senior author of the research, which was published in The Proceedings of the National Academy of Sciences. "So we thought, why not try to develop a closed-loop system that is glucose-responsive and mimics the function of the body’s naturally smart beta cells, and which can sense a person’s blood-sugar level and then secrete the insulin at the right time?"

And that’s exactly what they did – in an impressively compact and non-toxic package. Not only is the team’s insulin patch smart, it’s also tiny, painless and made from biocompatible materials, meaning few to none of the nasty physical side effects like inflammation that are common in current treatment methods. "It’s simple and convenient, as well as inexpensive," Gu notes.

How exactly does the diminutive device work? Basically, the ‘smart insulin patch’ is made up of more than 100 tiny needles – or ‘microneedles’ – that are each filled with even tinier storage units for insulin and glucose-sensing enzymes. All of this, on a thin square no bigger than a penny, can detect increases in blood-sugar levels and then secrete the right dose of insulin into the bloodstream when it’s needed – absolutely painlessly.

The tiny storage units mimic the body’s natural insulin generators, known as beta cells: these make and store insulin in sacs called vesicles, and sense increases in blood-sugar levels, at which point they release insulin into the bloodstream.

The artificial versions of these vesicles, which are made from two materials that can easily be found in nature – hyaluronic acid (HA), a natural substance used in many cosmetics, and 2-nitroimidazole (NI), an organic compound used often in diagnostics – were created by the following method.

First, the researchers connected the two materials to create a new molecule with a hydrophilic backbone and several hydrophobic side chains. A mixture of these molecules assembled themselves into a vesicle, with the hydrophobic parts pointing inwards and the hydrophilic parts pointing outwards. Then, into each of these vesicles, the team inserted a core of solid insulin and glucose-sensing enzymes.

The idea, which has so far only been tested successfully on mice, is that when blood-sugar levels increase, the excess glucose crowds into the artificial vesicles. The glucose-sensing enzymes then convert the glucose into gluconic acid, which consumes oxygen. As the hydrophobic NI molecules turn hydrophilic with a lack of oxygen (hypoxia), the vesicles quickly fall apart, sending insulin straight into the patient’s bloodstream.

When it came to finding a solution to administer the insulin to patients, Gu and his team decided to create a ‘microneedle array’ out of one of the same materials they used to make the vesicles – HA – arranging more than 100 microneedles on a thin silicon strip and integrating the tiny vesicles inside. When the patch is placed on the skin, the microneedles penetrate the surface, tapping into the bloodstream.

"It’s very tiny and convenient, and would be less expensive than a pump or electronic device," Gu says, adding that the entire design is also very forgiving to human skin. "The major materials in our formulation are all based on the very biocompatible polymer HA, which has been widely used for cosmetics and regenerative medicine. So patients don’t have to worry about inflammation or the potential for fibrosis, or anything like that."

We hope to get to market within five to seven years.

Biocompatible materials also show promise in other applications, according to Jicheng Yu, a PhD student in Gu’s lab, not only because they minimise side effects such as inflammation, but also because they are biodegradable, meaning they can be cleared by the body.

Of course, there are challenges in using biocompatible materials. "You need to functionalise the materials by chemical modification for different applications, and check if they are still biocompatible after modification," Yu notes, adding that these challenges are certainly not insurmountable – as demonstrated by the smart insulin patch – and that other potential applications include wearable sensors and transplant devices.

Returning to the smart insulin patch, while there is certainly promise for it to be eventually used on humans, this is currently based largely on speculation, as tests have so far only been carried out in vitro and in mice models of type 1 diabetes – albeit successfully. While in-vitro studies showed a "remarkably" faster release of insulin compared to other pH-sensitive glucose-responsive systems currently under development, the tests on mice found that the animals wearing the smart insulin patches experienced fast declines in blood-glucose (within 30 minutes), with blood-glucose normalised for up to four hours. Following that, their blood-glucose levels did increase, but still remained lower than the levels of mice in the other test groups for up to nine hours. They also remained free of hypoglycaemia, even after they were given an extra dose of the glucose-sensing enzyme and insulin.

Gu and his team think these results could be even more pronounced in humans. "We used human insulin when we tested on mice, but mice are not that sensitive to human insulin. So we predict that when we use human insulin on humans, the potential is actually higher," he explains.

But when will we find out? Well, the next step will be large-animal tests – on mini-pigs, for example – which will enable the team to collect more convincing data and optimise its formulations. Realistically, human trials would follow a few years later – although the researchers are doing everything they can to speed the process along.

"We are currently working with a pharmaceutical company to try and speed the translation process," Gu says. "We feel that a number of people – not only from universities and academia, but also diabetes patients themselves – really like our idea and its potential. It still may take several years to carry out clinical trials and eventually test on human beings, but we hope to get to market within five to seven years."

By that point, the device will have the potential to be even more effective than it is now. Not only do the researchers plan to make it customisable to account for each patient’s weight and sensitivity to insulin – "We can actually design the ‘smart insulin patch’ with different loading doses inside it," Gu notes, "so patients will be able to pick which one is best for them," – there is also plenty of time to optimise the device’s design in terms of materials and the enzyme-insulin formulation.

"The final result will definitely be based on the same concept, though: the microneedle array and the glucose-responsive formulation inside," Gu stresses, concluding that this is all in pursuit of one ultimate goal: "We want to commercialise our invention in order to improve not only the health of diabetes patients, but also their quality of life."