Polymers have a strong track record in healthcare devices, and are now also coming through in microfluidics. Lynette Eyb talks to Dr Holger Becker, co-founder of the German lab-on-a-chip production company microfluidic ChipShop, about polymer technology and manufacturing trends in microfluidics. 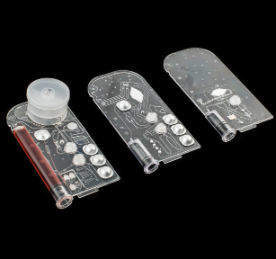 The use of polymers in the manufacture of medical and research equipment is nothing new to the healthcare world. Polymers are already extensively used in devices as wide-ranging as syringes and renal devices to tubing and IV components, with the worldwide medical polymers market estimated to be worth more than $10 billion. And that demand will continue to rise with the increasing need for low-cost, lightweight medical equipment to support an ageing population.

The microfluidics market is now also taking advantage of the benefits of polymer technology.

Microfluidics – often called lab-on-a-chip technology – involves the handling and manipulation of tiny amounts of liquid in scientific research and life sciences. Microfluidic ‘chips’ are made up of networks of micro-channels and reservoirs that are moulded or patterned to control fluids.

The devices can be tailored for specific applications across the fields of medicine, biology, chemistry and physics.

Until recently, microfluidic chips were manufactured exclusively using glass or quartz; however, this often resulted in prohibitive costs for researchers and commercial production.

Polymers, which bring with them immense cost and efficiency benefits, are therefore gaining traction, particularly in fields where there is demand for disposable polymer microfluidics that are cheaper to produce than glass or silicon equivalents.

Many devices, such as integrated diagnostic cartridges, are comparatively large – at least the size of a microscopy slide – which, aside from the primary material cost, makes glass structuring methods, such as lithography and lasers, relatively expensive.

“Typical markets for polymers are in diagnostics or biotech, where you simply discard the device after use, or in any device that requires a complex geometry with different height levels or mechanical elements,” says Holger Becker, co-founder of microfluidic ChipShop, based in Jena, eastern Germany, near the city of Leipzig.

While cost is clearly a deal-breaker, there are other advantages that make polymers an attractive option in microfluidics. Becker says the biggest appeal in terms of manufacturing is the speed of replication. Methods such as injection moulding and hot embossing mean it is possible to replicate an expensive master structure to create low-cost polymer replicas in a matter of seconds.

The wider range of structuring methods provides another big plus. “For many applications, you need a large dynamic range of structural dimensions,” says Becker. “For example, you may need to have a small microchannel – say 50µm height – beside a large reservoir of up to several millimetres in height. Or you might have complex geometries with ramps and multiple heights. This poses no problem for injection moulding. However, if you are using lithography-based technology, you are limited to one height level per photomask, and the dynamic range is also very limited.”

Secondly, there is a need to deposit reagents or biomolecules in microfluidic devices.

Typical markets for polymers are in diagnostics or biotech… or in any device that requires a complex geometry with different height levels or mechanical elements.

“These can be spotted on to the floor of a microchannel or deposited as freeze-dried reagents in wells,” says Becker. “Reagents tend to be very temperature-sensitive because proteins degrade at temperatures of more than 42°C, so the bonding method for sealing the microchannels has to take this into account. Classical glass bonding requires temperatures of several hundred degrees, so these are not suitable.”

Low-temperature glass-bonding methods, by comparison, use an additional intermediate layer, which adds cost and complexity, or require adhesives that are often undesirable.

With all materials, there are downsides, but the two main disadvantages of polymers are negated in this field because they are not relevant to target markets. Poor chemical resistance means that hospital disinfectants can cause weakness and cracking in polymer-based devices. While work is ongoing to strengthen polymer chemical resistance, this issue does not affect life science, or medical and diagnostic applications, as these devices are used as consumables and discarded after use. Temperature instability is also therefore not relevant to these areas.

A wide range of polymers now exists, which allows applications to be designed and produced based on the most suitable material.

Polymers are selected based on their optical qualities such as transparency and autofluorescence, their mouldability, surface chemistry (for example, low adsorption of proteins), and their barrier functionality, mainly against water vapour. Cost, of course, also plays a leading role.

“Thermoset materials such as photoresists like SU-8, or elastomers like polydimethylsiloxane (PDMS), which play a big role in the academic world, are used much less commercially.

“Thermoplastic elastomers are receiving increasing interest, but better optical properties are still needed with those.”

He says a potential growth area could relate to the development of thermoplastic materials that have a lower water contact angle, or better wettability.

“The standard thermoplastic materials are fairly hydrophobic, with water contact angle at more than 90 degrees. For capillary driven systems as well as for devices used in cell biology, a more hydrophilic substrate would be desirable.”

The future of manufacturing

It has arguably taken longer than expected to move opportunities from research labs to factory floors for larger scale production.

“The problems are less technical, but rather due to slow market adoption,” says Becker. “This is nothing specific to microfluidics, but rather due to the nature of the main markets – for example, the diagnostics and pharmaceutical industries are inherently conservative.”

The early manufacture of microfluidic devices was largely based on using existing semiconductor technology; however, this equipment is not particularly suited to polymers, and is also expensive, negating any cost benefits for researchers and small companies.

The key to opening the market has been the introduction of new production techniques such as hot embossing, which allows the polymer to be heated before being stamped with tiny channels from the master.

Reel-to-reel embossing has very good replication accuracy and can result in extremely low-cost devices, but there are limitations, says Becker.

In conventional embossing, the cycle time is comparatively long (minutes rather than seconds), which can be overcome by using reel-to-reel embossing, however this does not address other concerns such as a reduced dynamic range of features compared to injection moulding.

After embossing, the part also needs additional back-end processes (namely, dicing), while the embossing of through-holes is tricky.

“The fact that the devices are often not flat can also be a challenge if you are using optical detection technologies for analysis,” explains Becker.

In addition, the sector is being held back somewhat by a lack of off-the-shelf equipment solutions, most notably in hot embossing. “In most cases in academia, groups are building their own rigs using a hydraulic press,” says Becker.

3D prototype printing is an exciting prospect, but the technology has some way to go before it can achieve the quality outcomes needed.

“In this field, the geometrical resolution is limited at the moment – we often have requirements for dimensions and tolerances of 50±1µm. Available materials are also a limitation as they are now not generally biocompatible and have poor optical properties,” explains Becker.

We see an ongoing use for glass or quartz-based devices in areas where you have non-disposable devices – for example, in synthetic chemistry or microreaction technology.

“We are also seeing an increasing need for hybrid integration. At the moment we have an injection-moulded cartridge with a silicon/quartz element, a membrane or filter and additional elements made out of yet another material.”

As with all manufacturing processes, quality control is key – and it can prove challenging when working with such small dimensions.

“You can have either speed and 2D at medium resolution, or 3D at high resolution, but not both,” says Becker. “There is room for improvement in metrology.”

While polymers are on the rise, Becker says they will never completely replace other materials.

“We see an ongoing use for glass or quartz-based devices in areas where you have non-disposable devices – for example, in synthetic chemistry or microreaction technology, or in very harsh environments such as in the oil industry.”

In fields that require disposables, however, other materials will find it increasingly difficult to match the performance and affordability of polymers.