Students in Mexico have printed plastic supports for broken limbs that are breathable, able to prevent infection and ulcers, and ten times lighter than plaster casts. Designer Zaid Badwan explains the conception, development and manufacturing process behind this potentially revolutionary technique. 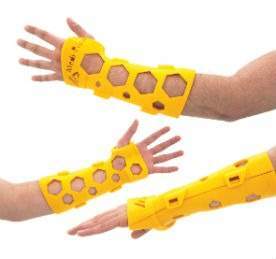 Anyone who has worn a cast on an arm or leg will be familiar with the problems that plague this age-old form of injury support. The many downsides of wearing plaster include being unable to scratch, the difficulty bathing without a plastic covering, and vulnerability to bacteria and infection (with the accompanying variety of unpleasant smells). If a plaster cast becomes wet, it can become useless and need to be replaced. Patients sometimes try to scratch under casts using long objects, which can result in complications.

The skin under a plaster cast, meanwhile, can become dry, and in warm weather the sweat glands or hair follicles can become infected, leading to dermatitis.

Constriction can also result in sores and, in more serious cases, deep-vein thrombosis. Compartment syndrome is another complication in which a too-tight cast puts pressure on nerves, arteries and veins, potentially damaging tissues permanently if untreated.

For more than 150 years since they were first used on battlefields, plaster casts have been the standard means of support for broken limbs. It has become traditional to decorate casts with signatures, get-well messages, or pictures. The image of a patient lying in a bed with a leg or arm in traction has been a kind of visual shorthand for hospitalisation since the first black-and-white photographs.

There have been trials with alternatives, such as plastic splints and fibreglass linings for casts, but high cost and practical drawbacks have restricted their use. The plaster cast has therefore continued to be the primary treatment for fractured bones worldwide, despite its disadvantages and potential risks to patient health.

No one has been able to come up with anything better that meets the needs of patients and clinicians alike, while remaining affordable. Until now, perhaps.

Graduate scientists from the National Autonomous University of Mexico have developed a lightweight plastic washable product that is breathable and can be removed. They have formed a start-up company called MediPrint, based in Mexico City, and patented the new product.

NovaCasts are lighter than traditional casts. You can have a bath with one on, and scratch yourself, and they enable better medical inspection.

NovaCasts are ten times lighter than their plaster equivalents and can be removed by unclipping, allowing them to be washed, and the patient to bathe. They fit snugly, and can be used on the trunk of the body, as well on limbs. They are made from plastic, so bacteria growth is much reduced, and an open design allows good ventilation and enables the patient to scratch itches. It also gives clinicians the opportunity to see any problems developing, and can be removed if necessary to allow treatment.

“The plaster from which conventional splints are made of is highly hygroscopic, which means it absorbs sweat and causes bacteria to proliferate, because there is no ventilation,” says MediPrint co-founder and director-general Zaid Badwan. “NovaCasts are lighter than traditional casts. You can have a bath with one on, and scratch yourself, and they enable better medical inspection.”

A process of 3D printing is used to develop each NovaCast from a scan of the injured limb. It takes three to four hours to produce each support, although MediPrint hopes to reduce this to an hour.

“It’s a specialised software, that, through anthropometry measurements, gives medics exact details about shape and size,” Badwan explains. “The geometry of the cast is automatically calculated for the printers.”

MediPrint has also developed software that enables doctors to take the requisite measurements, avoiding the need for scans. “The doctor merely has to enter the data, and the ideal geometry for the print is automatically generated,” says Badwan.

The inspiration for NovaCast arrived when Badwan’s mother fractured her left hand in an accident.

“Doctors gave her a bad splint, and had to surgically fracture her to correct it,” recalls Badwan, “but the new cast was put on incorrectly, and she now has a 50% disability in her hand.”

NovaCast’s potential is illustrated by the example of an elderly woman who had broken her hip and was expected to spend a year in bed. “MediPrint did a 3D scan on her and created a medical device that was perfectly adjusted to the shape of her body,” reveals Badwan. “It was reinforced with carbon fibre, which made it lighter and more resilient. The doctor approved it, and the patient was walking again the day after placement.”

Funding for more research has been secured, and there are further offers of investment from around the world. MediPrint raised more than $8,000 on a crowd-funding website to extend its capacity with a high-volume 3D printer. “This will give the company more machine time, which will be used to continue the research, modify and improve the machines, and avoid any unfortunate dilemmas between production and continuing innovation.” This, in turn, means that manufacturing will become easier to refine, and that Badwan and his team will be able to get NovaCast to the market more quickly.

“We want to continue to service all new devices,” continues Badwan, “and to continue to donate more to children who might otherwise be unable to afford prosthetics or orthotics. It is also necessary to have a support team: if MediPrint is making a device for a patient and its machine fails, it must still be possible to produce what is needed.”

The 3D technology has medical applications beyond tailored supports, such as making models of body parts. “Diagnostic medical images (CT, MRI) in DICOM (digital imaging and communications in medicine) format render an exact computer model of a bone or organ,” says Badwan. “This precise virtual replica is then fine-tuned and sent to a 3D printer that creates a high-resolution model. This physical print of the bone or organ is then used by healthcare professionals for various purposes, such as surgical planning; explaining procedures to patients or family members; and training medical students.

“MediPrint’s young Mexican entrepreneurs are dedicated to developing customised, high-tech medical devices manufactured by 3D printing. Its mission is to positively help people recover their capabilities in the safest and most comfortable way possible. The company is constantly researching, designing and developing new applications.

It receives advice from several specialists who support us with medical input, and is constantly searching for new solutions to the problems that people face every day. Medical devices are often very expensive or unavailable in Mexico; MediPrint wants to ensure that everyone can access what they need.”

There are no figures yet on how much a NovaCast will cost to produce or buy – though Badwan estimates they will sell for around $100 – and these financial aspects will decide whether or not NovaCast is a viable replacement for plaster in hospitals and clinics around the world. NovaCast must be universally affordable, free from practical difficulties and acceptable to patients if it is to succeed in the long term.

There are strong grounds for optimism with this product. Plastic cast seems like a logical replacement for plaster cast in medical support products. It may look like an item from Batman’s wardrobe, but it is more visually appealing than its bulky white ancestor, and what a relief for patients it will be to scratch when they need to, and take a bath without waiting weeks for a smelly and uncomfortable old plaster cast to come off.