The unique properties of bioresorbables allow the medical devices that use them to appear and disappear almost at will. Len Czuba, president of Czuba Enterprises, looks at how their phantom-like qualities have potential for use in breakthrough healthcare inventions. 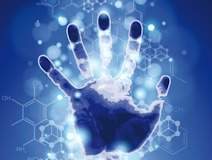 There is a groundswell of interest in the family of polymers known as bioresorbables. Their unique ability to melt away allows a bioresorbable medical device to be there one month and gone the next; almost like magic.

This ghostly property has made for groundbreaking medical devices that have been in use for almost 50 years, but recently new applications have been long in development and slow in approval. Now, however, there is an expected explosion of products based on bioresorbables, judging by three noticeable trends:

One of the first uses for bioresorbables was in sutures. Bioresorbable sutures could function like any other material but, after the healing was done, the sutures dissolved. This allowed better treatment of post-surgical wounds, resulted in quicker healing and eliminated the need for secondary surgery to remove inner sutures, resulting in reduced infection risks.

"There is an expected explosion of products based on bioresorbables."

Synthetic bioresorbable sutures were developed more than 40 years ago, based on glycolide-lactide polymers. Synthetic suture materials avoid any issues of contamination from animal components and, because they can be designed to have slower or faster dissolving times, the sutures can be based on the speed at which the wound is expected to heal.

Figures 1 and 2 show that different materials, in this case a PLLA and a PGLA, have different bioresorption times. Both can be used for sutures or bone screws or tissue anchors. The difference in performance is how long the implanted polymer will maintain its physical strength to allow the body to heal.

The success of early products stimulated research throughout the world. At many universities, graduate studies were carried out with the intent of learning how to work with these new materials. In parallel, corporate research into expanding the utility of bioresorbables began to discover newer grades and types of these polymers.

Use of bioresorbables in orthopaedics

These applications required the materials to have an initial resistance to degradability and good physical or mechanical properties to allow healing of slow-growing bone structures without premature failure of the bioresorbable product.

As product designers pushed the limits of the materials, polymer engineers responded with the development of newer composites including fibres, hydroxyapatite structures and new polymer chemistries that offered better physical properties. At the pace of products being developed and implemented, it appears that orthopaedic applications are beginning to outpace the use of bioresorbables for tissue and wound repair.

Looking to the future of bioresorbable

New products that rely on bioresorbables include cardiovascular applications. For cardiac stents, the advantage over other stents is that after they are deployed they re-establish normal bloodflow in the reopened blocked blood vessel, unlike bare-metal stents which often lead to restenosis.

"Bioresorbables are likely to be widely used as tissue scaffolding, where cells would be seeded into the bioresorbable."

Looking even further into the future, bioresorbables are likely to be widely used as tissue scaffolding, where cells would be seeded into the bioresorbable. Then, as the cells grow to confluence, the biopolymer slowly melts away leaving only living tissue behind in the form of whatever shape was originally formed by the scaffold.

In a similar use, bioresorbables will be introduced as drug delivery structures in new applications that need long residence times and long-term, slow-dose treatment. Much like the function of drug-eluting stents, bioresorbables can be made to mimic the same release process but in addition they are resorbed after their intended useful life. Propelled by these successful applications, other products are being developed and the challenge now is to find suppliers for the variety of materials needed.

1. Cost
Creative companies are finding innovative ways to use bioresorbables in new medical devices. However, despite the variety of types and grades currently available, there are sadly few suppliers of commercial quantities with the grades needed to optimise end-use products. One of the barriers to entry, from the product designers’ point of view as well as for suppliers of the materials, is the high cost of the polymers.

Bioresorbables range in price from several thousand dollars per kilogram to even more when purchased in smaller quantities. This makes product development cost a serious factor in any programme.

2. Supply and demand
There has also been limited progress in finding new sources of bioresorbables. Compared to the explosion of new products in the pipeline, sourcing remains a problem. The supply and demand equation is at play here with extremely high material costs keeping out all but the largest players and the reduced volumes being produced not being made in quantities that will help drive down prices. Regulatory issues are also in the mix.

In addition, some companies may not want to risk working with smaller suppliers in case they do not survive throughout the life of the medical device for which they were qualified. Switching to a new vendor requires a repeat of all qualification testing and the added costs are prohibitive. Thus most companies originally select as their primary supplier one of the larger, more stable companies, reducing the opportunity for competition from new suppliers.

"There has been limited progress in finding new sources of bioresorbables."

For years, the only major bioresorbable material suppliers were Boehringer Ingelheim from Germany and PURAC from the Netherlands. In 2004, Boehringer Ingelheim licensed its technology to Evotec but it no longer produces commercial bioresorbable polymers. In the US, the oldest commercial supplier of bioresorbables was Birmingham Polymers, later know as Absorbable Polymers International (API). API was merged into Durect at the end of 2004 and in total, for more than 25 years, this supplier has been producing high-quality biodegradable polymers for drug delivery and medical devices.

In the last ten years, a joint venture between Cargill and Dow Chemical in 2005 produced the standalone company, NatureWorks. This Minnesota-based firm produces lactides that could be used to make biopolymers but their primary target markets are consumer product applications.

A recent announcement by Cambridge, Massachusetts-based Metabolix describes a partnership with Antibioticos for the manufacture of polyhydroxyalkanoate biopolymers at their Leon, Spain manufacturing plant. However, although this is another material source, most medical device applications for these new materials are in very early stages of development.

3. Processing
Bioresorbables are very sensitive to heat and moisture, making them prone to degradation during typical melt processing such as extrusion, compression-moulding and injection-moulding. Micro-moulding has addressed the design of moulds and control of the processing conditions to control much of the lost polymer costs associated with bioresorbables, but this alone is not sufficient to bring down the processing costs.

It will be important for new process technologies to be developed around the use of bioresorbables because at traditional melt processing temperatures these new biopolymers become easily degraded to the point beyond useful life.

4. New technologies
One example of processing technology that enables processing of heat- and shear-sensitive materials is shear-controlled orientation injection-moulding. This process, developed at Brunel University in Uxbridge, UK, in 1982, reduces the shear on the polymer melt stream by using oscillating dual-piston mould filling.

"EO can be used successfully with bioresorbable polymers, but allowance must be made for the degree of molecular weight loss."

Another research group from IKV at Aachen University in Germany developed a method to lower the melt temperature required to melt heat-sensitive materials. This process uses carbon dioxide gas to saturate the materials prior to and during the injection-moulding process. A dramatic reduction in the temperature required to mould bioresorbables leads to a reduction in heat-related degradation of the materials and enables compounding of heat-sensitive drugs in the moulded parts. Certain antibiotics such as Gentamicin will be functional after moulding at the lower temperatures but not if processed at the higher temperatures.

A final example of how the industry can support the evolution of these materials is the recently announced T-Rex screw assembly, which has no compression zone in the injection-moulding machine. In this system, designed by Spiral Logic of Hong Kong, the heating of the material comes entirely from the heater bands and the screw is designed to minimise compression of the melt. For heat- and shear-sensitive biopolymers, this can reduce degradation of the polymer, eliminate waste, improve physical properties of the final product and expand the range of products that can be made using resorbables.

5. Medical device sterilisation
Any implantable medical device must be sterile before it is placed into the body.
Because most bioresorbable polymers are hydrolytically labile, high temperatures and high humidity can be problematic. Steam sterilisation is the most aggressive technique, but ethylene oxide (EO) sterilisation also exposes the polymers to both conditions.

"Sharps could be collected after use and put through a wash cycle similar to the dishwasher and the sharp edges or points would all dissolve."

EO can be used successfully with bioresorbable polymers, but allowance must be made for the degree of molecular weight loss. The molecular weight of many PGLA polymers will decrease by half during EO sterilisation.

Other influences are driving interest in bioresorbables including the desire to find material alternatives to petroleum-based polymers, the need to help solve the waste and litter problem and the pervasive culture of sustainability also called the ‘green’ movement. Biopolymers can help each of these goals although the cost penalty associated with these materials will continue to restrict rapid growth.

In speciality medical devices, one can imagine new products that couple immunochemistry with bioresorbables to provide specific targeting of cell or tissue antigens. This would allow treatment to be given or delivered to a target organ or part of the body. When the therapy is delivered and when predesigned bioresorption time is reached, the device is resorbed and the polymer is eliminated.

Beyond implantable applications, what if all sharps used in healthcare, from needles to scalpels to trocars and pins, were made of resorbable or erodible polymers? Sharps could be collected after use and put through a wash cycle similar to the dishwasher and the sharp edges or points would all dissolve. Such ideas become possible as we begin to better understand these unique materials.