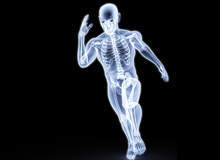 Polyetheretherketone, or PEEK, was originally developed in the late 1970s by the US aerospace industry, which was taken by its properties of stability at high temperatures and thus its potential for high-load, high-temperature applications. In the late 1990s, a highly pure and implantable grade of PEEK known as PEEK-OPTIMA was commercialised by Invibio Biomaterial Solutions and subsequently embraced by the medical device industry. Since then, the use of medical grade PEEK has grown exponentially, as Dr Steve Kurtz, corporate vice-president and director of the biomedical engineering practice at Exponent, explains.

"Many medical device manufacturers now use implantable PEEK as a way to improve the biocompatibility of load-bearing implants. It makes implants much more bone-friendly and is also much more compatible with diagnostic imaging than metal implants.

"Use of PEEK started in the 1980s with experimental medical devices, followed by clinical studies in the 1990s that led to widespread clinical acceptance, especially in the field of spine implants. PEEK is increasingly becoming the new standard biomaterial across a wide range of implant applications," he says.

Implantable PEEK polymers – manufactured in accordance with stringent quality standards and backed by full raw material traceability – are nowadays available in an array of formulations, ranging from unfilled grades with varying molecular weight, to image-contrast and carbon fibrereinforced grades. The first implantable unfilled PEEK polymer – PEEK-OPTIMA – was pioneered by Invibio Biomaterial Solutions in 1999, with image-contrast grades of the material and carbon fibre-reinforced variants (which provide significantly increased strength and stiffness) appearing in 2007.

The spine of success

"Implantable PEEK makes implants much more bone-friendly and is also much more compatible with diagnostic imaging than metal implants."

To get an idea of PEEK’s growing influence, you need look little further than the market for spinal cages, argues Kurtz. "PEEK is the material that everyone now expects to be the focus of biomaterial and medical design courses. It is not perfect for every application and one downside is that on a material-only basis, it is among the higher-cost biomaterials. But for many applications, it can bring quite specific and valuable benefits.

"The benefits of PEEK in spinal cages have led to its widespread acceptance in these devices. In fact, spinal cages are now an industry worth over $1bn, and the majority of that is PEEK. So you can argue PEEK has helped, or at the very least been instrumental, in creating a billion-dollar medical device industry," he explains. PEEK’s rise to prominence has coincided with expansion of, and advances in, the field of instrumented spine surgery.

In the US, instrumented spinal fusion is now one of the most common surgical procedures for chronic neck and back pain in patients who do not respond to conservative treatment. An estimated 466,000 cervical and lumbar fusions were performed in 2008. Historically, of course, spinal fusion instrumentation was predominantly fabricated from metallic biomaterials, including stainless steel and titanium alloy, because of their strength and resistance to fatigue. One of the main drawbacks of materials such as these, however, is their incompatibility with diagnostic imaging, including MRI and CT scans, which are crucial for visualising changes to the spinal cord and soft tissue structures of the spine.

The fact that many of these procedures will now be using PEEK polymer-based devices is a key solution to this problem.

Within the past decade, PEEK polymers have matured into an established and widely accepted family of biomaterials for spinal devices, agrees Kurtz. But researchers are not stopping there and are pushing at the boundaries to see where PEEK could be used in the future. There has been, for example, growing interest in the potential benefits of enhancing the osseo-conductivity of PEEK with coatings to provide direct bone ongrowth. Similarly, PEEK research is at the forefront of tackling the long-term challenge of surgical site infection, with researchers excited about how PEEK tissue scaffolds and anti-microbial formulations may help in this area.

"You increasingly see artificial discs using PEEK and there is more use of PEEK in spinal rods where it is replacing the more conventional metal rods. Its key biomechanical advantages in this context are that it is much more flexible and motion preserving," says Kurtz.

"You can argue PEEK has helped, or at the very least been instrumental, in creating a billion-dollar medical device industry."

"The chatter among engineers at the moment is around ways to make PEEK more bioactive. There is a lot of cutting-edge research going on around this. PEEK is a very inert material – which is great because you obviously want implants to be as bio-inert as possible," he adds.

"But we are increasingly moving towards more of a focus on regenerative medicine and the greater use of biomaterials within this context. We want materials to play a greater role in tissue healing; materials need to be more integrated within the healing process and not just be passive," Kurtz continues. "So we are beginning to see experiments around embedding calcium phosphate and hydroxyapatite within PEEK to promote bone ongrowth. Rather than sitting by the bone and letting it get on with it, it is actively encouraging bone growth," he adds.

"There is also research looking at ways of making PEEK anti-bacterial by incorporating nano-silver and blending PEEK with synthetic hydroxyapatite whiskers – which can provide bio-compatible reinforcement – or by adding porosity agents to make the scaffold more porous, which can encourage bone ingrowth.

"If you have a porous network you tend to have much better bone growth. The bone interdigitates with the implant so that you get the tightest interface possible," explains Kurtz.

The properties of PEEK

Polyetheretherketone (PEEK) is an organic polymer thermoplastic. It is obtained by step-growth polymerisation from the dialkylation of bisphenolate salts. It has excellent mechanical and chemical resistance properties that are retained at high temperatures.

PEEK has a glass transition temperature of around 143°C and melts at around 343°C. It is highly resistant to thermal degradation as well as attack by both organic and aqueous environments.

It also has outstanding wear and abrasion resistance and a low friction coefficient. Because of its robustness, PEEK is commonly used to fabricate items used in demanding applications, including, of course, those designed for the medical devices industry.

More information about biomaterial applications for PEEK can be found at.

PEEK can be utilised in the following procedures:

So what, then, is the future of PEEK? Take the increased sophistication of medical devices, along with the ever more global and competitive devices market, and then throw in the demographic challenge of ageing Western populations – a trend that will, if anything, boost demand for spinal and osteo procedures still further – and it is easy to see how such a versatile and useful material could become even more important to device manufacturers.

"PEEK has the future potential, for example, to be injection mouldable, so it could be very amenable to high-throughput manufacturing and even micromoulding."

"For the future, we are I think going to see tremendous advances, with PEEK becoming an increasingly viable alternative to metal in other ways than just implants. PEEK has the potential, for example, to be injection mouldable, so it could be very amenable to high-throughput manufacturing and even micromoulding," explains Kurtz.

"When you start to take this into account it then also starts to become more cost-effective compared with metal implants. Combine this with the added benefits of greater biocompatibility, high strength and some exceptional material properties and you have the potential for really shifting paradigms in device design and performance. In a global, competitive economy medical device companies are always looking for ways to innovate and make implants better, to get more value. PEEK can simply provide more value and flexibility for implants, as well as be a potential replacement for metal implants," he adds.